With its striking rose-colored cupola and dazzling white Belle Époque façade, Le Negresco hotel stands out like a beacon on the wide, beachfront Promenade des Anglais of Nice.

Tall and proud and clasped between the sweeping Baie des Anges (Bay of Angels) in front and Mont Boron behind, this classic, century-old property occupies one of the most scenic locations on the French Riviera. It is little wonder celebrities of all kinds from dancer Isadora Duncan to the Beatles once wandered its hallways seeking entertainment, inspiration and relaxation. Even today, sipping on 1930s style cocktails surrounded by sumptuous period furnishings, one senses the shadow of their presence still. 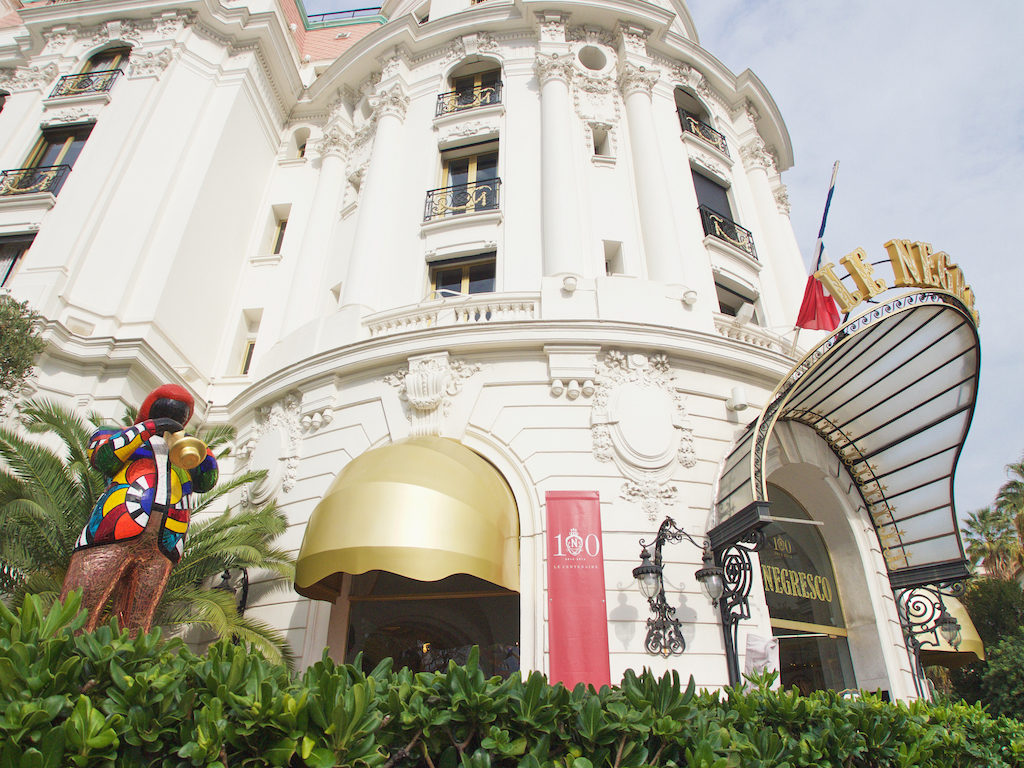 Due to its age – built in 1913 by Romanian emigrant, Henri Negrescu – and staff wearing quaint 18th century-style costumes, we half-expected it to be decidedly staid but a funky statue of polyurethane foam and resin inlaid with colored glass and mirrors of jazz trumpeter Miles Davis at the front entrance hinted otherwise.

As you enter the spacious lobby, passing a speckled marble staircase on one side and a vintage elevator on the other, a large rotunda provides further evidence of the owner’s eclectic tastes. Hanging from the high dome is a splendid chandelier composed of 16,800 separate pieces of Baccarat crystal initially commissioned by Czar Nicholas II, but which remained undelivered due to the October revolution. Its twin is housed in the Kremlin. Take time to admire the Art Nouveau cupola beneath which is a private art collection so diverse it makes one wonder if this was an art museum offering accommodation rather than a hotel, and indeed whether it would be interesting for museums to consider exclusive overnight stays.

Large-size portraits of such historical luminaries as Emperor Napoleon, Empress Eugenie and Louis XV as well as 17th century Italian baroque chairs and modern eclectic works in wood, metal and marble by artists such as Franck Tassi, Gregory Morizeau and Sacha Sosno delight the eyes. Paul Pacotto’s rotating works, which create dazzling visual transformations through the interplay of light and shadow, are mesmerizing. Even a hint of playfulness was added – a 1950s barber’s chair from St. Louis. Low-flung tables and armchairs the same color as the carpets they stood on provided comfortable settings to admire the captivating artwork at one’s leisure.

Much credit goes to Jeanne Augier, owner of Le Negrescu since 1957. Now in her mid-90s and living on the hotel’s 6th floor, she has meticulously supervised the collection of over 6,000 pieces of art spanning five centuries.

Upon stepping out of the elevator on to the 4th floor lobby en route to our room, we were as delightfully surprised as we were in the rotunda. Complementing a dizzying white-on-black carpet, a design based on an original work by Jean-Pierre Yvaral, are authentic decorations from the era of Napoleon the First (1804-15), including a portrait of the former French leader in full military regalia, a wooden bed, a handmade infant’s cradle, a sturdy grandfather clock and a richly-embroidered couch. To cap it all, prints by Salvador Dalí line the walls of the corridor, with a photograph showing the famed artist in conversation with Miss Augier herself.

Our room, one of 117 in the hotel, also reflected diversity of taste, with art deco wardrobes, an intricate, marquetry-style wooden writing desk and vibrant red Louis XV style chairs. Candy-striped wallpaper in the bathroom contrasted vividly with the overall neutral tones of the room, another mark of Mrs. Augier style, which seems to pay more attention to overall esthetics than to stylistic period. A clawfoot tub, a double sink and a panoramic view over the bay from a narrow, wrought iron balcony completed our enchantment.

Our enjoyable short stay at Le Negresco was capped by two particularly memorable experiences – a cozy evening of soothing piano music and cocktails at Le Bar and a lunch at the bright and cheery La Rotonde restaurant.

With its high ceiling, walnut wood paneling and cozy armchairs, the atmosphere of Le Bar is reminiscent of an English countryside manor or a private gentlemen’s club in 19th century London. As the British community originally financed the city’s early tourism development, the choice of ambience seems most appropriate. A large tapestry dating from 1683 adorns one wall with a design reflecting the theme, ‘Time Enchained by Love’ while portraits in old gilded wooden frames line the walls, including one of Sophie, daughter of Louis XV, dating from 1747. Boasting such quirky details as an upper wood balcony, a crystal whisky fountain and a bronze bust of Joan of Arc, it is not surprising movie director, Woody Allen, chose Le Bar for scenes in ‘Magic in the Moonlight.’

With varied cocktails divided into themes such as ‘One cocktail one epoque’ or ‘One barman one cocktail,’ choosing only one proved difficult thus we tried two – ‘Royal Negresco’ created by M. Saporta, chef barman of Le Ralais Bar from 1936 to 1976 and ‘Once Upon a Time’ created by Lofti Kahlaoui, the head mixologist. The former proved to be the winner. 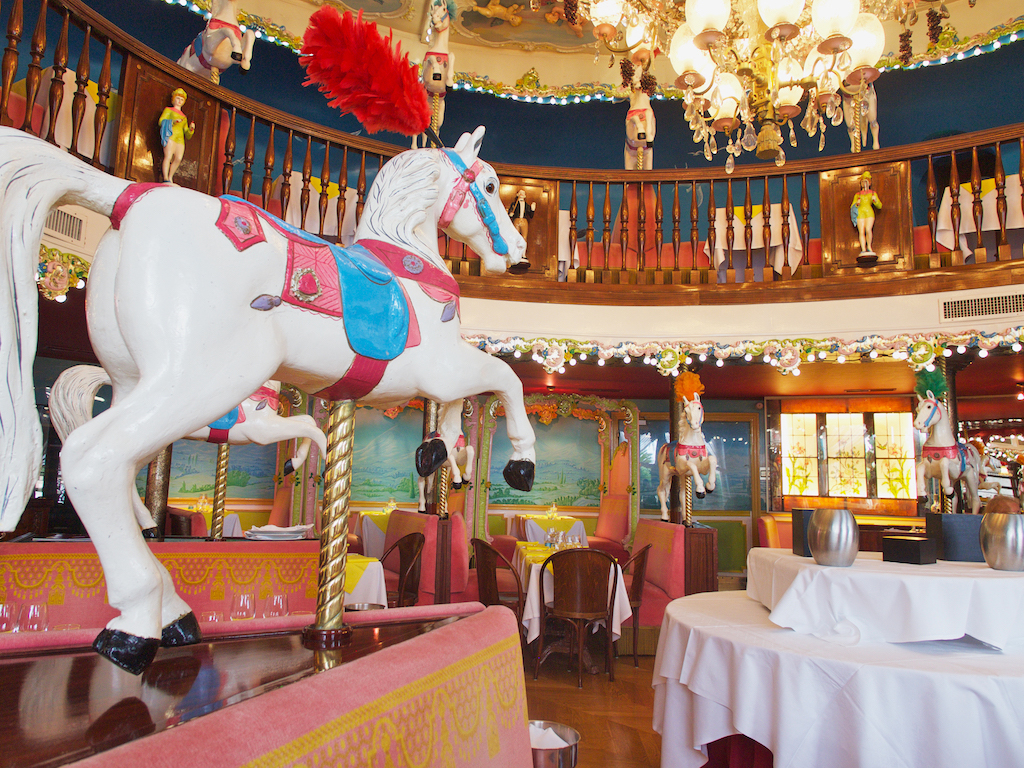 La Rotonde’s kaleidoscope of color is in marked contrast to the more sedate Le Bar and the duck foie gras with a chutney of kiwi and mango is a pure classic French pleasure to enjoy in carrousel-like ambiance. Follow this with a dish of young cockerel prepared by chef Jean-Denis Rieubland – who also runs the hotel’s Michelin-star Le Chantecler restaurant – in a crust of breadcrumbs and grapefruit peel and set on a bed of vervain infused white quinoa, with ribbons of red onion. In line with the restaurant’s eclectic atmosphere, try a surreal-looking cube of chocolate, painted gold and filled with white chocolate mousse supported by two chocolate sable biscuits resembling walls of delicate lace. 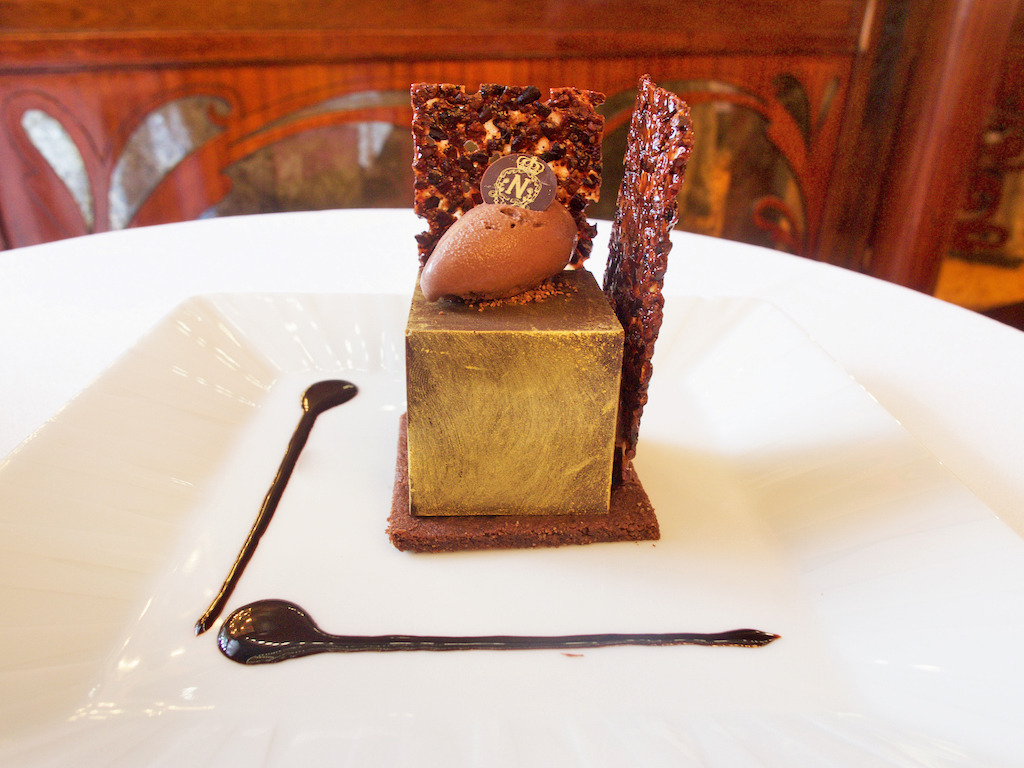 Boasting an enticing Belle Epoque style and diverse artwork spanning five centuries, Le Negresco provides a treasure-chest of nostalgic creativity and with an eye on continued improvements – thirty-five rooms have recently been renovated and a leisure area comprising a spa and swimming pool could be operational within two years – it is an a even more alluring place to stay.